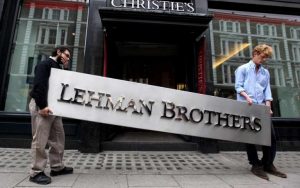 10 years on from the 2008 crisis, how vulnerable is the global financial system?

On the 15th of September 2008, Lehman Brothers declared bankruptcy, triggering the 2008 crisis and later global recession. Its effects and lessons persist in the banking sector and in the economies of the world.

10 years after the last great financial crisis, analysts and regulators strike a balance of the lessons learned. The most common unknown is what the most probable indications of the next crisis are and what could prevent or stimulate new contagion.

Possible vulnerabilities after the 2008 crisis

The weakest points of the global financial system, according to The Economist, could be found in real estate, and offshore financing in dollars and in euros, which cannot be separated from the previous crisis.

This publication claims that the former risk can only be mitigated if reforms are introduced, such as reducing the borrowing of households with joint-venture mortgages or by setting permanent limits to the proportion between the amount of loans and the value of properties.

Mention is also made to the fact that the crisis spread across borders because European Banks were left without enough dollars to pay their loans denominated in that currency and, since then, offshore debts have doubled. Unlike the 2008 crisis, when the Federal Reserve acted as the lender of last recourse, the American political system is unlikely to tolerate this again. One possible solution is to find ways of doing this kind of financing more safely, making up a pool of dollar reserves among emerging markets. As for the euro, the rise in nationalism could impede a solution to the structural problems of the common currency.

On the other hand, according to Robin Wigglesworth, editor of the Financial Times for the Americas, the most probable causes of another crisis should not be sought in known doubts like a slow-down in China, a shock in the Eurozone stimulated by political turbulence or in a large-scale trade war. Given the complexity of the economy, the next crisis is more likely to start from the intersection between 2008 post-crisis regulations, fragmented market infrastructure (under-capitalized high-frequency trading companies substituting the banks) and the growth of passive investment and algorithm-based transactions. According to JP Morgan, HFT (high frequency trading), quants, passive funds and options make up approximately 90% of the volume traded in the United States.

Another aspect to highlight is that, based on the data of the US Securities Exchange Commission, according to the 2017 report, Standard & Poor’s handled 48.7% of the ratings made the previous year and the three largest risk rating agencies accounted for over 96% of ratings. This situation is not very different from 2007-2008.

One could say that the signs from the global economy are mixed if we look at the long term. According to the International Monetary Fund (IMF), economic growth in advanced economies has reduced the challenge of maintaining an accommodating monetary policy to drive economic recovery while financial vulnerabilities are corrected in the medium term.

However, according to the same source, the risk of inflation persists. Central Banks could respond to inflation aggressively, leading to more restrictive financial conditions. This could have an effect on the price of high-risk assets in the emerging markets. For central banks, the key lies in normalizing monetary policy gradually and reporting their decisions clearly to support global economic recovery.

How to prevent a new crisis?

New policies and regulations have already tackled many of the mistakes that led to the crisis in 2008, claims Christine Lagarde, director general of the International Monetary Fund. Banks are in a better capital, liquidity and borrowing position these days. Many off-book institutions have been regulated too, subprime mortgages have almost completely disappeared and a large proportion of derivative instruments have to be settled and cleared centrally.

But there are banks still that are not strong enough, the problem of “too big to fail” persists and innovations like fin-techs and high frequency trading bring additional challenges to the economy.

The greatest concern of the director of the IMF, who considers ethics to be fundamental, because they have economic consequences, is that some regulators are under pressure from the industry to relax post-crisis regulations. More emphasis should be on long-term prudence and diversity, especially regarding including more female leadership in finances, both on boards of directors and in oversight agencies. According to her research, this has an impact on financial stability.

She concludes by mentioning that “the system is safer, but not safe enough, and growth has picked up, but it has not been shared enough”.

The Economist. Has finance been fixed? The world has not learned the lessons of the financial crisis. 6th September 2018

Wigglesworth, Robin. The next financial crisis won’t come from a ‘known unknown’. It is the unexpected interaction of different forces that can be dangerous in the financial system. Financial Times.  7th September 2018