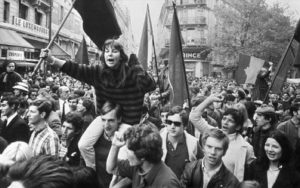 May of 68 and the student movements. What is left of that political commitment in today’s university?

The 50th anniversary of that historic (and now mythical) May of 68 is currently all over the media, when the student movements took to the streets and raised their voices against social injustices as a sign of a genuine manifestation of a new social and cultural category: youth in action. A global scale student movement that was a significant expression of a shock wave that did not only limit their protests, demands and unrest to France. This “expanded” global nature that 1968 represented was reflected in countless, intense actions of young people and students in other scenarios, such as, for example, La Paseata dos Cem Mil (Río de Janeiro), the Prague Spring, La Plaza de las Tres Culturas de Tlatelolco (Mexico City), the Great Cultural, Proletariat Revolution in China or the demonstrations in the United States against the war in Vietnam.

The range of experiences of these diverse student movements was wide and varied, depending on the different cultural traits, political systems, economic circumstances, etc., but they all had some elements in common: the demands, social mobilizations; synergies, influences and international exchanges between student movements; the backgrounds and political and educational motivations of the aspirations of these university students; their capacity for social mobilization and negotiation with the institutions and political players; the philosophical component and the sociological background of the “youth in action”; youth cultures and counter-cultures; or the discourses and the experiences of social, cultural and political development in common environments.

Half a century after May of 68

Half a century after May of 68, this significant political, social and educational event, perhaps we should be asking about a grand paradox to be found in today’s students and the university as an institution. University is no longer an institution for the elites; access to it is far more democratic now, thanks to a general increase in the educational level of the population and a policy of study grants and subsidies. Today, university is more “universitas” –as its Latin etymological origin indicates– or universal than ever, comprised of a far greater social plurality of students than 50 years ago. Thus, it should be a more educational, political and dynamic space or agora of co-existence than before, a place where the university community in general and students in particular, freely show and manifest their opinions and demands, mobilizing and participating in a plural, democratic culture.

But there are signs of a progressive and increasingly wide-spread political apathy among students and certain disaffection, which affects student mobilization on the university scene. Despite the fact that, once again, we are at a global and globalized, geo-political “crossroads”, everything seems to indicate that the university as a space and “young university students in action” as a social category have run out of steam and its importance has declined. We do not want to suggest with this that today’s youth does not make use of its freedom of expression, nor that it does not express its opinions, but what we can claim and show is that students are increasingly less acting as a collective force and that university is ceasing to be the scenario of their demands. In a way, we could say that they have replaced the streets, squares and universities (public spaces) with others, apparently more private or individual. There is ample “cyber-mobilization” on the internet (you only have to look at the success of platforms like change.org) and on social media, with virtual interconnectivity that favors digital freedom of expression that however, and at the same time, acts in detriment to student and university mobilization.

This individualist turn is an educational, rather than generational phenomenon or issue. Without intending to be reductionist or to ignore the multi-causality of the social, political, economic or cultural circumstances that explain this behavior, we would like to highlight the pedagogical element that affects the very essence of university as an institution. The current university model, in which the greatest concern is to train workers to improve their employability and their job future, is moving away from humanistic educations, the critical spirit and the civic education that is necessary for civic and political commitment.

One of the functions of university is to train competent and competitive professionals, but one cannot forget a full education in other kinds of skills of a more social and civic nature in this pedagogical project. University should not become an institution in which the students (customers) acquire a degree or post-graduate degree (product). University was and is something more than that; an institution of higher education in which critical thought and education for civic and political participation help to train not just workers, but to produce committed professionals and citizens. It is not a question of nostalgia for the past, or of returning to “Paris 1968”, but it is a question of making demands and recovering that integral educational spirit that led students to “be realistic and ask for the impossible” in ‘May of 68”.

Portada » Tendencias Globales » May of 68 and the student movements. What is left of that political commitment in today’s university?
Send this to a friend