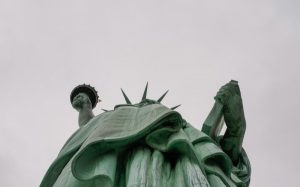 The accelerated technological and digital advances of recent decades have made the world a more complex, multidimensional and interdependent place. National states have seen their capacity to exercise their political power limited, even in the arena of international relations. The conventional idea of military and economic power has lost out against “soft power” or the capacity to influence without using violence or coercion. The digitalisation of life and politics is a phenomenon that explains the importance of soft power and especially the importance of digital diplomacy when thinking up new world scenarios. But, there is no clear consensus on the effectiveness of the latter or on digital tools in general as trustworthy factors to build stable relations of power and influence.

What is soft power?

As a consequence of the Fourth Industrial Revolution, marked by accelerated technological and digital advances, the world has become more complex, multidimensional and interdependent and national states have seen their capacity carry out the activities that characterise them constrained. In foreign affairs, the countries with the greatest influence internationally have slowly taken on board the fundamental idea that the classical way of conceiving political power in the old world (power is equal to military might plus economic power) no longer has the same capacity to attain the desired goals. This form of hard power is still vitally important, but how it is exercised can no longer be based solely on imposing, unilateral logic. Instead, the capacity to encourage co-operation and build networks and relations have become the new currency.

The term soft power was coined in the late 1980s to understand this changing reality. According to G. John Ikenberry of Foreign Affairs, the best way to define soft power is as “a country’s capacity to persuade others to do what it wants without using force or coercion”. The person who coined the idea, political analyst Joseph S. Nye Jr, explains in Foreign Policy that “a country’s soft power can come from three resources: its culture, its values and its foreign policy.” This characterisation allows the multidimensionality of soft power to be appreciated along with the difficulty when addressing it, understanding it, measuring its scope and identifying which countries of the world hold it.

With a view to overcoming this difficulty and to addressing soft power globally, strategic communication consultant Portland and the USC Center on Public Diplomacy (CPD) have drafted the publication Soft Power 30 – A Global Ranking of Soft Power 2017 that condenses one of the most complete global comparative assessments of soft power, combining both objective and subjective data and international surveys.

This way, based on an exhaustive review of the academic literature on the issue and bearing in mind the 3 sources identified by Nye – mentioned above – the ranking seeks to capture a wide range of factors that contribute to the efforts of a nation to build soft power. 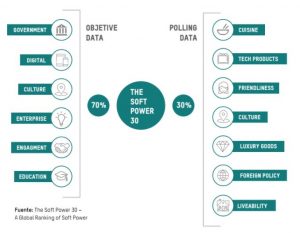 A systematic analysis of these data enables the report to draw the following main conclusions:

The analysis contained in the report explains current international volatility and also the importance of soft power as a resource to be exploited by those countries and non-state players who seek to have some kind of global influence. The digital revolution plays a vital role in this respect.

Digital diplomacy and politics as a power factor

As digital tools become more common and are adopted by more and more state and non-state players, strategies and tactics for using them more effectively are evolving rapidly, so the digital component of soft power grows increasingly in terms of relevance and importance. In the field of diplomacy, its importance and potential in undeniable for introducing messages and reaching audiences.

According to Ilan Manor, researcher from the Department of International Development of the University of Oxford, over the last ten years, the use of digital technologies in diplomacy has become increasingly diverse: “Norwegian ambassadors are using Skype to converse with university students; Palestine is adopting Facebook as a means to make commitments to Israeli citizens; The Indian Ministry of Foreign Affairs is developing computer games for children of the Indian diaspora, while the Georgian Ministry of the Diaspora offers online courses in the Georgian language; United Nations Ambassadors are using WhatsApp to coordinate their voting on several resolutions, while the Kenyan Ministry of Foreign Affairs is using Twitter more and more to provide emergency consular aid. And more recently, Foreign Affairs Ministries have started to use software programmers to analyse large data sets or to manipulate social media algorithms using bots”.

The potential is almost unlimited. But there are doubts around the effectiveness of these tools and whether or not they belong in the field of diplomacy. According to Shaun Riordan of the USC Center on Public Diplomacy, “diplomatic analysts should be more cautious with social media as these are necessarily easy tools for diplomats”. On the other hand, Oxford professor Corneliu Bjola highlights three points to bear in mind:

Instability and volatility in current international politics presents serious challenges for global players and countries. Soft power as a concept, but also as a fluid and flexible form of power is a very important dimension to bear in mind when grappling with this specific scenario. The most important world powers, listed by Soft Power 30. A Global Ranking of Soft Power 2017, have managed to consolidate their position too as important benchmarks in this area and all the other global players should learn from them. But all that glistens is not gold and the pros and cons of bringing digital tools into politics should be analysed in detail by each particular player. As Riodran highlights, “to date, diplomats have trusted latest-generation instruments created for other purposes, adapting them to their needs. The next challenge will be to work with software programmers to design new digital tools that are up to the job and meet the needs of 21st century diplomacy”.