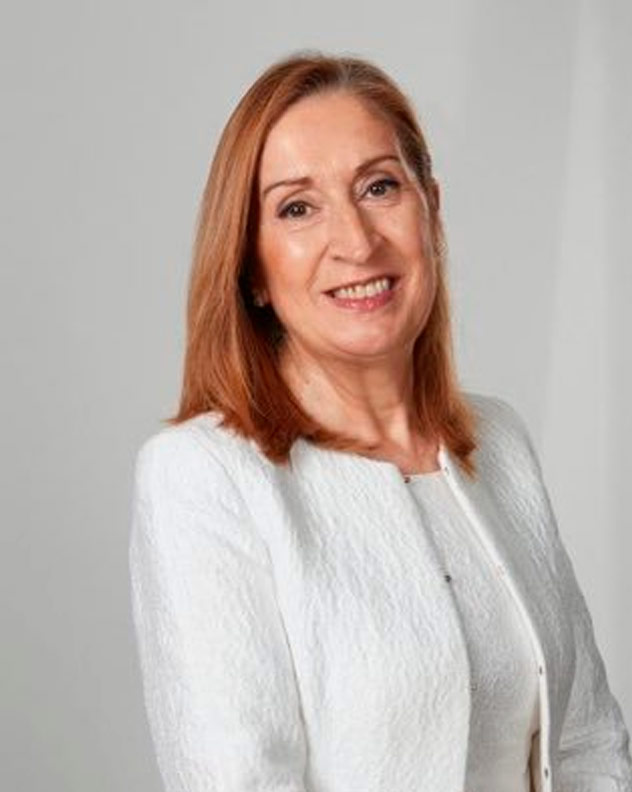 "I have always believed that ideas should be approached with prudence, defended from respect and articulated with strength"

Ana María Pastor Julián is a Spanish politician with a long career and wide public recognition, currently Vice President of the Congress of Deputies. She has been President of the Congress of Deputies (2016-2019), Minister of Public Works (2012-2016) of Spain, Minister of Health and Consumer Affairs (2002 -2004) of Spain and Deputy on behalf of the Partido Popular in several legislatures.

In her conferences, Pastor presents, among other issues, aspects related to governance and public affairs, the political and economic situation and future prospects. As well as everything related to negotiation, as she has achieved very relevant agreements with different political forces in very difficult circumstances. In addition, she has a deep knowledge of everything related to health systems at the international level.

Previously she was also Undersecretary of Education and Culture (1999-2000) and President (2000-2001) and Interior (2001-2002). Ana Pastor is a civil servant and belongs to the Superior Body of Public Health and Sanitary Administration) in special services when she started her political career in the Galician Government.

During her mandate at the head of the Ministry of Health, the Spanish Agency for Food Safety and Nutrition was created to guarantee the effectiveness of food control systems. At the same time, during this period, the Law of Cohesion and Quality of the National Health System was approved, for greater coordination of public health administrations, guaranteeing equity in health and the reduction of inequalities in health matters, and creating the Agency for Quality of the National Health System. The Law on the Regulation of Health Professions was also approved, which regulated the basic aspects of qualified health professions, guaranteeing adequate human resources planning.

Ana Pastor has a degree in Medicine and Medical Surgery from the University of Salamanca, a Specialist in Family and Community Medicine, an Executive MBA in Business Management, a Master's Degree in Health Administration and Management and a Master's Degree in Public Health. Throughout her career she has received many decorations, including the Royal Order of Carlos III and the Grand Cross of the Order of Civil Merit, the medal of the Cortes Generales to the Advisory Council for the commemoration of the 40th anniversary of the Constitution and the Grand Cross of the Military Order of Christ of the Portuguese Republic.

Portada » Conferenciantes » Ana Pastor Julián
Send this to a friend
This site use cookies Find out more.