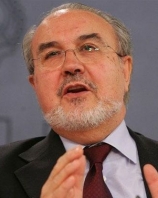 To be more effective, we need to boost and unify the internal market.

In 1999 he became European Commissioner for Economic and Monetary Affairs. During his time at the European Commission, Solbes was responsible for overseeing the rules that were to underpin the introduction of Europe’s single currency. He has been a board member of the energy group Enel and is a European business advisor for Barclays Bank as well as a board member of its Spanish subsidiary.
Prior to his appointment as European Commissioner in 1999, Solbes held several ministerial posts in Spain and was a member of the Spanish Parliament. In 1985, he was appointed Secretary of State for Relations with the European Community and chaired the Internal Market Council during Spain’s first presidency of the EC. He was Minister of Agriculture, Food and Fisheries and subsequently, of Economy and the Treasury, when he took charge of guiding Spain out of the crisis.

In 2004 he took up that post again in President Rodríguez Zapatero’s government and was also second Vice-president of the government until 2009. He currently chairs the Supervisory Board of the European Financial Reporting Advisory Group (EFRAG), whose mission is to advise the European Commission on the implementation of the International Financial Reporting Standards and the financial data that companies must provide. He is now President of FRIDE, a European think tank for global action.

Portada » Conferenciantes » Pedro Solbes
Send this to a friend
This site use cookies Find out more.